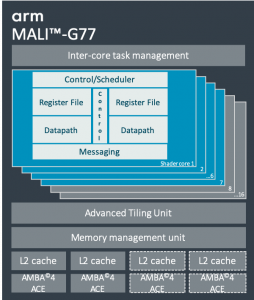 The Cortex-A77 CPU and Mali-G77 GPU target mobile computing for smartphones. The Cortex-A77 increases the instructions per cycle (IPC) of the previous Cortex-A76 CPU by 20%, to improve computing performance to meet the demands of untethered AR/VR and HD gaming.

The Mali-G77 is built on the new Valhall architecture which increases performance by more than 30%, compared with the earlier Mali-G76 GPU, exploiting the architecture’s 16 wide warps (threads) and 16 fused multiply-adds (FMAs) per execution engine per core to increase compute performance, while a quad texture mapper and 16 shader cores enhance the graphical performance.

The GPU increases performance density by 30%, energy efficiency by the same margin and is also claimed to bring a 60% improvement to machine learning (ML) to boost inference and neural net (NN) performance, compared with the Mali-G76.

The Valhall architecture has a superscalar engine, credited with the energy efficiency and performance density improvements, and a simplified scalar instruction set architecture (ISA).